The Call of the Free – Book Launch Event

On the 4th of November 2016, the Shīʿah Institute hosted a well-attended book launch at Senate House, University of London, for ‘The Call of the Free’; the first volume in the ʿĀshūrāʾ Literature series, published by The Shīʿah Institute Press.

‘The Call of the Free’ portrays the events leading up to the massacre of Imām al-Ḥusayn, his family, and his companions at Karbala on the day of ʿĀshūrāʾ in 61 AH/680 CE, as seen through the eyes of al-Ḥurr al-Riyāḥī, a man caught between his worldly duty as a soldier of the Umayyad Caliphate and his conscience.

‘The Call of the Free’ is an adaptation by Sayyid Amjad H. Shah Naqavi of Ṣawt al-Ḥurr al-Riyāḥī by the Iraqi poet and playwright Riḍā al-Khafājī, which employs many characteristic features of traditional English prosody. It is the first work of its kind to introduce the long theatrical tradition of Mystery plays in honour of ʿĀshūrāʾ to the Anglophone world.

This new publication offers readers an insight into the rich commemorative practices surrounding the lamentation of the massacre at Karbala.

From the 31st of August to the 2nd of September 2016, the Shīʿah Institute held its second Annual Symposium on the subject of ‘Lamenting Karbala: Commemoration, Mourning, and Memory’, at the Warburg Institute, University of London. The Symposium was an international event; twenty six scholars from the four corners of the world attended and presented their papers.

From the 31st of August to the 2nd of September 2016, the Shīʿah Institute held its second Annual Symposium on the subject of ‘Lamenting Karbala: Commemoration, Mourning, and Memory’, at the Warburg Institute, University of London. The Symposium was an international event, attended by renowned scholars from the four corners of the world. The welcome note was delivered by the Dean of the Shīʿah Institute, Sayyid Amjad H. Shah Naqavi.

The Ascension of the Intellects: Commentary on the Supplication of the Lame – Book Launch Event

The Call of the Free – New Publication

The Word of ʿAlī

On the 23rd March 2016 at Senate House, London, The Shīʿah Institute hosted the first I.K.A Howard Memorial Lecture, with a talk from Professor Charles Burnett (of the Warburg Institute) on ‘Translation and Morality in the Middle Ages’. At the event, Professor Burnett spoke on the history of translation in the mediaeval world and the various methodologies deployed by translators working with Arabic, Greek, and Latin in this era. Professor Burnett is a renowned scholarly authority on the transmission of Arabic science and philosophy to Western Europe, and has published over two hundred works on subjects ranging from astronomy and astrology to medicine and psychology. This lecture was held as a tribute to the memory of the late I.K.A. Howard, the distinguished scholar of Shīʿah Islam and esteemed translator of many early Shīʿah texts, who taught for many years at the University of Edinburgh. Professor Burnett’s talk was preceded by an introduction from The Dean of the Shīʿah Institute, Sayyid Amjad H. Shah Naqavi.

The Shīʿah Institute would like to thank all our guests for their attendance and Professor Charles Burnett for his lecture. 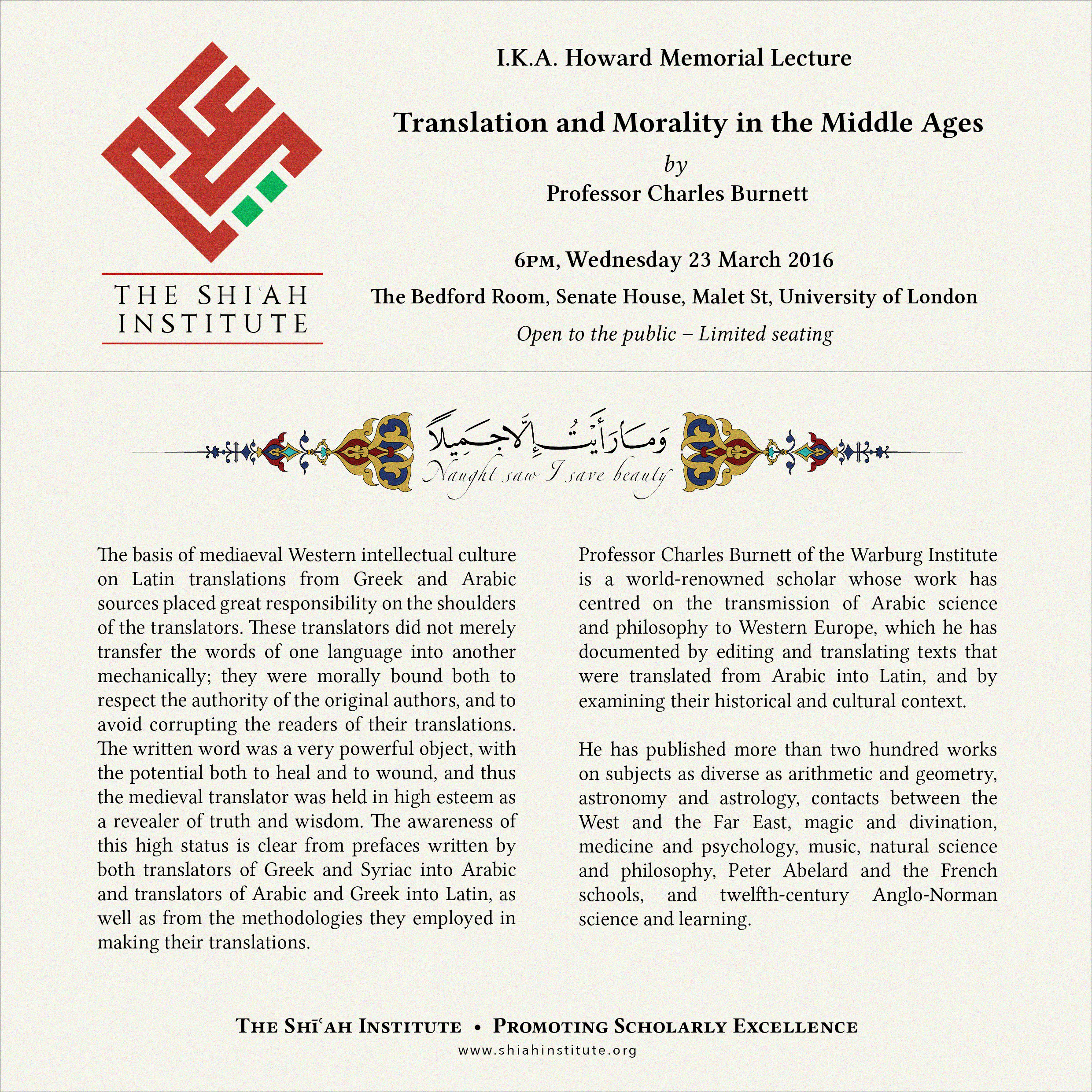