This three day international symposium convened by the Shīʿah Institute will address one of the perennial issues in the Shīʿah tradition, namely the martyrdom of Imām Ḥusayn and his companions at Karbala in 680 AD, and explore across disciplinary boundaries how this cataclysmic event in Islamic history has been figured in discourse and ritual, and subsequently mourned and commemorated for over 1300 years.

Its commemoration has been interpreted and performed in a plethora of diverse and distinct ways in manifold times and places, from Iraq, Iran, and the Levant, to Central and South Asia and the Arabian Peninsula, and far beyond. While countless scholars have sought to explain Karbala’s cosmic significance and the religious obligation to commemorate ʿĀshūrāh, as well as pilgrimage to the third Imām’s shrine, a great many cultures have assimilated and incorporated this sacred event into their own living traditions and identities in creative and unexpected ways. The Shīʿah Institute’s Annual Symposium will strive to capture the profound and variegated nature of this rich and plurivocal heritage.

This symposium endeavours to examine the discourses and ritual practice relevant to Imām Ḥusayn’s martyrdom, its commemoration and remembrance in the areas of classical, medieval, and modern theology and eschatology; comparative religion; ‘popular’ versus ‘high’ religion; historiography; devotional and hagiographical literature (dirge, epic, poetry, elegy) and its vernacularisation; theatrical depictions and performance of the scenes of Karbala in Iran and Iraq and replicas of the shrines in South Asia (taʿziyah); ritual practice and sartorial traditions; pilgrimage (ziyārah) and issues of divine intercession; architecture, and sacred space (shrines, takiyyah, ḥusayniyyah); gender and gendering imagery and practices; murals; painting; film; and questions of material culture more broadly. In this way the Shīʿah Institute aims to convene a symposium that is comprehensive in scope and multi-disciplinary in approach in furtherance of the academic study of Shīʿah Islam.

Please send a 300 word abstract and short biography to info@shiahinstitute.org by 1 April 2016.

Limited funding will be available to support the travel expenses of successful applicants. Papers selected will also form part of the Shīʿah Institute’s symposia series, which is published as an edited volume on an annual basis.

Because of the sheer number of submissions, only successful applicants will be contacted once abstracts have been reviewed and assessed.

On the 9th of October 2015, the Shīʿah Institute held the book launch for The Mystery of Prayer by Ayatollah Ruhollah Khomeini in Macmillan Hall at Senate House, University of London. At the event, Riyaz Dhalla gave his reflections on the life and thought of Ayatullah Khomeini, Sayyid Ali Kazimi spoke on the importance of The Mystery of Prayer, and the Dean of the Shīʿah Institute, Sayyid Amjad H. Shah Naqavi discussed the challenges and theories involved in authentically translating the work. The event commenced at 6.30 pm and concluded at 9 pm with a food and beverage reception. The Shīʿah Institute would like to thank all our guests for their attendance and our speakers for their talks.

The Mystery of Prayer

The Mystery of Prayer by Ayatollah Ruhollah Khomeini, completed in June 1939, represents the author’s most original contribution to modern Shīʿī philosophy (ḥikmah) and gnosticism (ʿirfān), a work that draws upon scriptural sources and the Shīʿah intellectual and mystical traditions to engage with the understanding of the higher pursuits of mankind’s reconnection with God. Taking the ritual of prayer as a vehicle for comprehending the nature of reality as a reflection, manifestation, and determination of the divine, The Mystery of Prayer elucidates upon the esoteric dimensions of each stage of the ritual prayer as the wayfarer ascends through degrees and theophanies to arrive in the presence of God.

The first work in the Modern Shīʿah Library, published in June 2015 in partnership with Brill, Sayyid Amjad H. Shah Naqavi’s English translation includes extensive explanatory footnotes and a twenty-eight-page introduction that explores the sources, influences, and development of Khomeini’s gnostic concepts and taxonomies in his intellectual milieu.

The Shīʿah Institute’s Annual Symposium 2015: Philosophy and the Intellectual Life in Shīʿah Islam

On the 2nd to the 4th of September 2015, the Shīʿah Institute held its first Annual Symposium at the Warburg Institute, University of London. This year’s Annual Symposium was themed around the subject of ‘Philosophy and the Intellectual Life in Shīʿah Islam’.

The following papers were delivered at this year’s Annual Symposium:

The Shīʿah Institute is proud to announce its partnership with the School of Oriental and African Studies (SOAS), University of London in providing financial support for a new module in the department of the Study of Religions entitled ‘Shi‘a Islam: Religious Authority and Community Identity’. This module, available from the commencement of the 2015–2016 academic year, will introduce undergraduate students to the origins, developments, and historical manifestations of Shīʿah Islam, as well as exploring the contemporary outlook of Shīʿah Muslim communities across the world.

Head of the Department of the Study of Religions, Dr Erica Hunter said: ‘I am thrilled that this new course on Shīʿah Islam will be offered within the Department. The course will enable students to broaden their appreciation and understanding of Islam and explore the considerable important and rich contributions that Shīʿism has made over the centuries to this world religion.’

Sayyid Amjad H. Shah Naqavi, Dean of the Shīʿah Institute, said: ‘We are delighted and honoured to be in partnership with SOAS in offering this module. The Shīʿah Institute believes that there is no greater nurturer of knowledge and empathy in people than a good higher education in the humanities. If our ignorance is our only enemy, then teaching and learning have a unique role in dispelling that ignorance and nurturing a more harmonious world.’

For more information on our partnership, visit the SOAS website.

Announcement – The Mystery of Prayer

The Shīʿah Institute, in partnership with Brill, is delighted to announce the first volume in the Modern Shīʿah Library series, The Mystery of Prayer.

Sayyid Amjad H. Shah Naqavi’s introduction and annotated scholarly translation of The Mystery of Prayer by Ayatollah Ruhollah Khomeini brings to light a rarely studied dimension of an author better known for his revolutionary politics.

Writing forty years before the Islamic revolution, Ayatollah Khomeini demonstrates a formidable level of insight into the spiritual aspects of Islamic prayer. Through discussions on topics such as spiritual purity, the presence of the heart before God, and the stations of the spiritual wayfarer, Ayatollah Khomeini elucidates upon the nature of reality as the countenance of the divine. Drawing upon scriptural sources and the Shīʿah intellectual and mystical tradition, the subtlety of the work has led to it being appreciated as one of Ayatollah Khomeini’s most original works in the field of gnosis (ʿirfān) and philosophy (ḥikmah).

The Mystery of Prayer shall be available in hardback and paperback formats from June 2015, and is currently available to preorder on Brill’s website.

The Shīʿah Institute will be convening its first annual symposium at the Warburg Institute, University of London from Wednesday the 2nd to Friday the 4th of September 2015.

The theme for the first symposium will be Philosophy in/and Shīʿah Islam and will comprise a series of papers that will provide theoretical reflections on the relationship between philosophy, modes of philosophical reasoning, living, and Shīʿah Ithnā ʿAsharī traditions, as well as studies of particular thinkers, texts, and schools of thought throughout Shīʿah history. We plan to publish the papers presented at each symposium in an annual volume organised around that year’s theme.

The full programme for the Symposium will be available shortly, but in the interim we are pleased to announce that the following of our fellows and scholars in the field will be amongst those presenting at the symposium:

On the 14th of November 2014, the Shīʿah Institute had the honour of commemorating the Lords of Karbala and contributing 1,104 verses of poetry to the Urdu literary canon with the launch of Marsiyah dar hal Janab Jawn ibn Hawiyy mawla Abi Dharr al-Ghifari; or, Jawn Martyr of Karbala Lamented by His Highness Raja Mohammad Amir Ahmad Khan (1914-1973). This work marks the Shīʿah Institute’s first publication, and the first volume in The Shīʿah Heritage of South Asia series.

END_OF_DOCUMENT_TOKEN_TO_BE_REPLACED 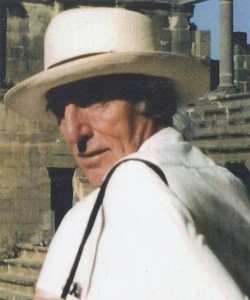 I. K. A. Howard, who died in March 2013, was a distinguished scholar of Islamic studies, and one of the few Western scholars to devote themselves the study of Shi’ah Islam. He translated a number of important Shīʿah texts and wrote a series of articles on Shīʿah Islam at a time when there was little other work being undertaken on this important subject in Western universities, as such he can be seen as a pioneer in the field. For many years he held a senior lectureship at the University of Edinburgh where he taught Arabic and Islamic studies. His exactitude and scholarly rigour were unfailing, as his students had cause to note, but this was tempered by an encouraging and generous approach to their endeavours.  He came to Islamic studies through a circuitous route, but none the worse for doing so, beginning with a degree in Greek from the University of Wales in 1961. END_OF_DOCUMENT_TOKEN_TO_BE_REPLACED